Remembering A Cool Place I Visited 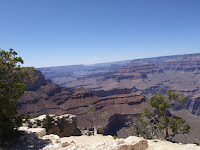 This is a take-off from one of the prompts that start...10 Things I Like...or some such like that.  I've always found it difficult to write to prompts so I usually ignore them. Instead I'll do some reminiscing about a place I visited that left an impression...both times.

Last summer I took my granddaughter to visit the Grand Canyon. We chose the day-long trip from Phoenix via a chartered van. God gave us a perfect day with bearable temperatures once we got there. Lunch had been arranged for us while we stopped in Sedona. At the canyon, we exited the van and followed the crowd to the canyon's edge.

To say the vistas were awe-inspiring does not come close to how they affected me. Apparently they affected my granddaughter the same way. At one point, I caught sight of her, outlined by the clear sky, as she stood on a precipice of land that jutted out into the canyon. She remained there for the longest time, just taking in the sight. It confirmed my time and money was well spent.

Actually. this was my second visit to the site. Way back in the mid-nineties, I did a cross-country trip with my father. Coming back from California, we arrived at the canyon barely thirty minutes before sundown. We scrambled toward the nearest lookout,hoping to get there before it got too dark to see anything, and were rewarded with the unbelievable light-show as the setting sun turned the canyon walls into a multi-colored, ever-changing  phantasmagoria.

If you've never been, I strongly urge everyone to visit at least once in their lifetime. It's a sight that will permanently rearrange your concept of this planet we inhabit.