It's All Over But The Leftovers

Thanksgiving is our most family-oriented holiday. It's the one day a year set aside for families to get together and just be family. For most people, that means a crowd around a loaded table, cousins getting reacquainted, menfolks gathered around the television set.

For as many years as I can remember, ever since our two sons married, had families of their own, and started new traditions, my husband and I made the two-hour trip to Dallas to share this day with his extended family who all lived in that area. Because of my husband's declining health, last year was the first we've missed. And with his death earlier this year, I found it difficult to generate any kind of interest...it would be just another day for me.

My granddaughter had different expectations. It was Wednesday, the day before Turkey Day. We were in Longview having lunch at China King when she dropped the bombshell. Despite the fact they are still unpacking boxes in their new house they moved into two weeks ago, she wanted a thanksgiving dinner -- turkey and dressing served and eaten in their new home.

My brain went into a whirl. It'd been years since I cooked a turkey, never mind all that went with this traditional meal. What to do? What to do? I mentally scanned those restaurants I thought might possible have turkey and dressing on their menus. Luby's was close by...I bet they would be offering it.

With four turkey and dressing LouAnn meals bought and paid for, our next stop was WalMart for the necessary pumpkin pie. I out-voted her Cool Whip and picked up a container of heavy cream, deciding I'd have time to whip up the real thing.

When I arrived, carrying my bowl of whipped cream, the pie was almost baked and they had unpacked the china plates Carlie had inherited from her other grandmother. Even her busy mother dropped in long enough to share the meal. So, possibly, a new tradition was begun.

There was even enough turkey & dressing to take home for a sandwich later.

Picking Up The Pen 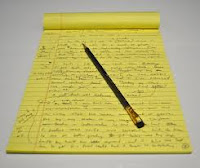 Could it be a sign that my life is beginning to resemble some order and consistency? Our writers group scheduled a NaNo write-in for its regular meeting this month. November, for you non-writers' information, is National Novel Writing Month. The goal is to challenge yourself to write 50,000 words in one month. Actually its grown to include writers internationally who challenge and encourage one another during the ordeal through the website and locally.

One of those ways is to gather together just to write. I didn't find myself in a position to accept the challenge and sign in but did want to participate in the local write-in. So, I dug and pulled out a work-in-progress covered in dust. My first glance at the scratchpad of notes told me this story began  life in October of 2016. Wow! That meant I'd not done any of what I call 'real writing' in over a year.

It took me a couple hours to gather notes and locate long-forgotten websites I'd used in my researching. Since I needed to familiarize myself with the story-to-be, I decided my time at the write-in would be spend reading through what I'd already written and the assortment of research notes I'd gathered already. I would make notes to move the story forward.

That evening, after a short business meeting, the group broke for snacks before the writing began. I drew my yellow pad close, picked up my pen, and began to write.

I filled an entire sheet before coming to a stop. To add cream to my coffee, my waking minutes the next day were filled with 'what ifs' and 'I needs' connected with the story -- a good sign that my writing cells have reawakened. With only about 3,000 words written into the story, I have a lot of research and writing to do. But, its such a good feeling to know my writing self has been restored and is alive and well once again.
Posted by Unknown at 8:22:00 AM No comments:

Background 'noise' or not

I've been giving some thought to a body's need for silence. What kicked it off was my granddaughter's comment as she moved her bedroom furniture from my place to her new house. "You need music playing in the house, Grandma."

Then, this morning I get a text from son commenting on the quiet of his new house. Meanwhile, I'd spent my 'Morning Pages' time writing with the window beside me open to catch outdoor sounds. There's always a steady stream of traffic noise coming from a close-by highway mixed in with the chatter of wildlife. Occasionally, I'd catch the sound of wind gusting through the treetops.

Some people keeps the television on throughout the day but I'd have a problem with the 'talking heads. I'am partial to music playing while a project keeps me occupied...usually classical streaming on my computer because my radios won't pull in the distant signal. Other times, I like to listen to a christian station except sometimes the newer songs come across too heavily imbued with a rock beat. That's when the instrumentation overpowers the vocal and you have no idea what message is being sung.

My background noise is usually the tinkling of wind chimes. I have a musical set on both my front porch and back deck. Depending on which is in motion, the steady chime tells me which way the wind is blowing. Sometimes, though, my choice is silence. I find it necessary so I can listen and sort out the multitude of thoughts that flash through my mind. That's when I head for my grove of planted pines and walk the rows, up and down, back and forth, with only the whisper of my footsteps on the bed of fallen needles. The trees absorb all traveling sounds and create a deep silence I find very comforting.

Just goes to show how individually we've been created.Whatever background noise...or no background noise you prefer, doesn't really matter. What matters is that you make the most of these limited days we are given here on this earth.
Posted by Unknown at 5:52:00 AM No comments:

I've been working on Christmas gifts - making some pieced quilts for loved ones. This morning, my 'old faithful' sewing machine decided to jam and nothing I did could set it free. You have to understand, this has been a dependable workhorse for many, many years. I inherited it from a sister who's life was cut short with a brain tumor. I have no idea how long she used it but it has been serving me faithfully for almost twenty years.

This was not one of those 'do-everything' modern machines to begin with. It came enclosed in a desk-like piece of furniture which pleased me greatly. Over the years I've owned and used it, this machine has helped produce multiple baby quilts, thrown-together-quickly blankets for people left homeless because of disasters, and a whole slew of other sewing projects.

The machine has made its share of visits to the repair shop over the years and the last time I took it in, the technician couldn't guarantee how long "the fix would hold" and that replacement parts were getting difficult to find. That was a few years ago and it hummed along for me until today.

Guess I'm being forced to invest in a new machine but I'm really not interested in those mind-boggling machines that do everything while you watch it in action.

Got me to thinking about how nothing man-made keeps running forever. Living out here in the country, seems like there's always something breaking down and needing fixing. And not just machinery, sometimes even this human substance I inhabit fails me. Guess my parts are also beginning to wear out after seventy-plus years.