Came across a curious bit of information browsing for a topic to write about today. In a way, it's connected to writing so I'll include it. 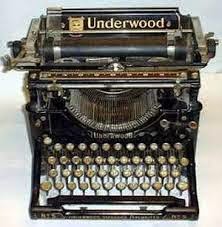 The question was asked: Why aren't typewriter or keyboard keys arranged in alphabetical order?

Well, it appears the early typewriters--the first practical one was built in 1867--did have their keys in more or less alphabetical fashion. This arrangement allowed typists to type so fast, the keys would jam up. To slow down the typists, the keys were rearranged into a diabolically difficult pattern.

With this changed arrangement, the left hand does about 57% of the typing, the right only 43%. The three weakest and least coordinated fingers, the two pinkies and the left ring finger, make far more than their share of strokes. Besides, to type most of the common words, one must move up and down between rows.

In 1936 someone named August Dvorak designed a keyboard where 70% of the typing is done on one row, 57% of done with the right hand, and the stronger fingers do more work.

So why are we still using the original arrangement? World War II came along and all manufacturing was devoted to wartime production. The U.S. Navy's order for two thousand of these typewriters with new-designed key placement was never filled. The novelty never caught on after the war.
Posted by Unknown at 5:44:00 AM