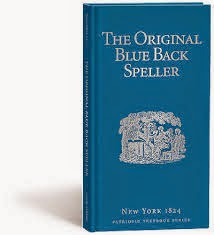 Have you ever wondered why Americans and English people spell certain words differently? These are the kinds of questions that writers are always asking themselves.

I have a copy of this marvelously fascinating book titled "The Book of Totally Useless Information" by Don Voorrhees. He answers questions like: Why are diamonds measured in carats? Isn't that something you've always wondered about? Or, was there really ever a Mother Goose? And, why is a left-handed person known as a southpaw?

Anyway, I found the answer to satisfy my curiosity about the difference in language between American English and English English. Seems that we can trace it back to an Englishman living in the American Colonies, Noah Webster. Right, the same Noah Webster who gave us the "Blue-Backed American Speller" back in 1783. He hoped to establish a proper American spelling of the English language that would give America the true mark of culture.

We can credit Webster for the spelling of the following English words: center for centre, color for colour, fiber for fibre, defense for defence, tire for tyre, as well as numerous others.

Webster might drop his false teeth if he heard the broad differences in dialect today between say, the Deep South and New England. I think, however, he would be pleased at the way American English has spread and been adopted around the world.
Posted by Unknown at 5:47:00 AM