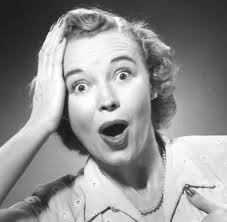 Have you ever found yourself flabbergasted? Isn’t that a fabulous word? It’s a very old word first mentioned in a magazine article as a new piece of fashionable slang. Being a writer, I’m interested in words.

Flabbergast is a verb and it means to be overcome with surprise and bewilderment; to be astounded. It turned up in print in 1772, in an article on new words in the Annual Register. (Bet you didn’t know that magazines have been around that long either.)

In 1823, flabbergast was noted as a Sussex word, perhaps from some dialect. Some would suggest that the word is an arbitrary invention suggested by flabby (adj.) or flap (n.) and aghast (adj.). The source of the word’s first part is obscure. It might be linked to flabby, suggesting that somebody is so astonished that they shake like a jelly.

Words sometimes change their meaning over the years. Take the word pitcher. As my husband pointed out to me earlier today, the word pitcher is used in two totally different ways. (He's fascinated by words also.)

Its older usage is as a container with a spout used for storing and pouring contents which are liquid in form. Generally a pitcher also has a handle, which makes pouring easier. Then in 1722, it came into use as a noun to describe "one who pitches," originally of one tossing hay into a wagon, etc. The word became associated with the game of baseball as early as 1845.

Of course, we’ve all heard the proverb "Little pitchers have big ears" The phrase depicts a child as the pitcher with ears hearing what people around them say or do, which is stored inside. The adults are also cautioned that the children might not be as naïve as they perceive them to be.

If you've found my little meandering on words amusung or helpful, I hope you'll leave a comment. Is there any particular words you'd be interested in knowing more about?
Posted by Unknown at 9:33:00 AM