Can we bury the hatchet? 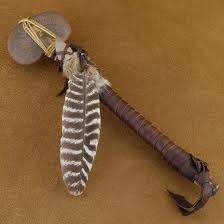 Ever wonder how the phrase “bury the hatchet” come into use? It's actually an American saying. One source referred to it as:” an Indianism (a phrase borrowed from Native American speech).” How’s that for coining a new word? Hatchets were buried by the chiefs of Native American tribes when they came to a peace agreement.

Folklore tells us that the term comes from an Iroquois ceremony in which war axes or other weapons were literally buried in the ground as a symbol of newly made peace. To celebrate the new peace, the Iroquois buried their weapons under the roots of a white pine. An underground river then miraculously washed the weapons away so the tribes could never use them against each other again.

Tradition has it that the practice of confining weapons in the earth originated during the formation of the Iroquois Confederacy, which happened at an indeterminate time before the arrival of Europeans in the Americas. The Iroquois leaders, Deganawidah and Hiawatha, convinced the peoples of the Five Nations - the Mohawk, Oneida, Onondaga, Cayuga, and Seneca – to put aside their differences and celebrate their cultural and linguistic ties by forming a coalition.

The first mention of the practice in English is of an actual hatchet-burying ceremony. A translation of Thwaites' monumental work Jesuit Relations, 1644, suggests the practice: "Proclaim that they wish to unite all the nations of the earth and to hurl the hatchet so far into the depths of the earth that it shall never again be seen in the future."

Samuel Sewall wrote in 1680, "I writt to you in one [letter] of the Mischief the Mohawks did; which occasioned Major Pynchon's goeing to Albany, where meeting with the Sachem the[y] came to an agreement and buried two Axes in the Ground; one for English another for themselves; which ceremony to them is more significant & binding than all Articles of Peace[,] the hatchet being a principal weapon with them."

The phrase was used in 1759 by the Shawnee orator Missiweakiwa when it became obvious that the French war effort during the Seven Years’ War (French and Indian War) was collapsing. The Shawnees had sided with the French against the English, but now the Shawnee would "bury the bloody Hatchet" with the English.

Exactly 50 years after the Battle of Little Bighorn, White Bull, a Sioux Indian Chief, and General Edward Godfrey buried the hatchet in the tomb of the Unknown Soldier at Garryowen, Montana.

If the phrase is of Indian origin, why "hatchet" and not "tomahawk"? It wasn't always. In 1705 Beverly wrote of "very ceremonious ways to concluding of Peace, such as burying a Tomahawk." But eventually "hatchet" buried "tomahawk";   not inappropriate, since tomahawk is an Algonquian word, not Iroquoian.

Before the end of the eighteenth century, the phrase was extended to include peace between countries, specifically between the U.S. and U.K. In the early nineteenth century, the phrase was extended further to refer to personal or professional relations between individuals, the sense in which it is most widely used today.
Posted by Unknown at 10:03:00 AM