Here Comes The Mail! Not! 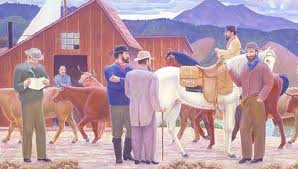 The recent announcement by the USPS (United State Postal Service) of its soon-to-be discontinued Saturday delivery set me to wondering. Just when did rural mail delivery come into existence?

The first postal service in America arose in February 1692, when a grant from King William and Queen Mary empowered Thomas Neale "to erect, settle and establish within the chief parts of their majesties' colonies and plantations in America, an office or offices for the receiving and dispatching letters and pacquets, and to receive, send and deliver the same under such rates and sums of money as the planters shall agree to give, and to hold and enjoy the same for the term of twenty-one years."

During the Second Continental Congress, Benjamin Franklin was appointed the first postmaster general. The United States Post Office (USPO) was created in Philadelphia under Benjamin Franklin on Wednesday, July 26, 1775.

Ten years before waterways were declared post roads in 1823, the Post Office used steamboats to carry mail between post towns where no roads existed. The use of the railroad to transport the mail was instituted in 1832.

Fayette County in southeastern Indiana may be the birthplace of Rural Free Delivery. Formerly, residents of rural areas had to either travel to a distant post office to pick up their mail, or else pay for delivery by a private carrier. Rural letter carriers began service with the experiments with Rural Free Delivery in 1891.

RFD finally became an official service in 1896 under President Grover Cleveland. RFD was adopted generally in the United States in 1902. The introduction of parcel post delivery nationwide RFD service came about in 1913. Parcel post service allowed the distribution of national newspapers and magazines, and was responsible for millions of dollars of sales in mail-order merchandise to customers in rural areas. Today, as in years past, the rural delivery service uses a network of rural routes traveled by carriers to deliver and pick up mail to and from roadside mailboxes.

From the very beginning, the government's mandate to the post office was to deliver the mail "as frequently as the public convenience ... shall require." According to the Postal Service, at the beginning of the 20th century, letter carriers in U.S. cities made multiple delivery runs each day. It wasn't until 1950 that, "in the interest of economy," residential delivery around the country was permanently reduced to once daily.

Now the Postal Service says it will lose approximately $7 billion this fiscal year. John E. Potter, has gone to Congress and officially asked for permission to do away with Saturday mail. He has told Congress that this will save more than $3 billion every year.

Will you miss the thrill of seeing the mail carrier approach on Saturdays?