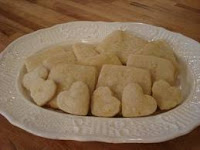 Heard a local radio commentator proclaim his unfamiliarity with shortnin’ bread – he was asking what it was. H-m-m-m, hadn’t he ever heard that familiar tune?

The first version of this traditional plantation song was written by white poet James Whitcomb Riley in 1900. His song, which he collected from East Tennessee, was named "A Short'nin' Bread Song—Pieced Out.” Al Jolson and the Andrews Sisters recorded popular versions of the song. Allan Sherman also did a Jewish-oriented satire, "Mammy's Little Baby loves Matzoh Balls, "substituting "matzo balls" and "Pesach bread" for "shortnin' bread."

For those unfamiliar with this food item, shortening bread is a fried batter bread, the ingredients of which include corn meal, flour, hot water, eggs, baking powder, milk and shortening.. It's a Southern quick bread like cornbread. The term Shortnin' Bread (also spelled "Shortenin' Bread" or "Short'nin' Bread)  implies not much more than a recipe containing fat and flour.

Shortening is any fat that is solid at room temperature and used to make crumbly pastry. The term "shortening" seldom refers to butter but is more closely related to margarine. Originally, shortening was synonymous with lard, "shortening" has come almost exclusively to mean hydrogenated vegetable oil. Crisco, since 2002 owned by the J.M. Smucker Co., is still the most well-known brand of shortening in the US. In Ireland and the UK, Cookeen is a popular brand, while in Australia, Copha is popular, although made primarily from coconut oil.

And, if you’re ever in downtown Long Beach, CA., be sure and stop by the Shortnin Bread Bakery or check out their menu at http://www.shortninbreadbakery.com/