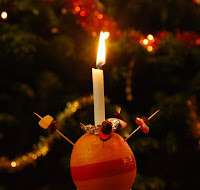 A Christingle is a symbolic object, related to the pomander, used in the advent services of many Christian denominations. A Christingle consists of:

The word Christingle means 'Christ Light' and celebrates the light of Jesus coming into the world: but no one is really sure how Christingles came into being.

There are several stories told of how the custom was started. There is an ancient Welsh service called a 'Celenig' where Christingles are used and the Moravian Church (part of the Czech Republic) has held Christingle services for over 200 years. This is how some Czech people think the first Christingle might have been made:

Many years ago, children were asked to take a gift to put beside the crib in Church. One family had no money for gifts but were determined to take something. They found an orange which they felt would be okay, but were disappointed to find it was going mouldy at the top. However, they thought they would scoop out the bad bits and put a candle in the top and turn it into a lantern. Thinking that it looked a bit ordinary, one of the girls took a red ribbon from her hair and tied it around the middle. They had difficulty getting it to stay in place, so fastened it with four small sticks, on the ends of which they put a few raisins. They took their lantern to church and were afraid of the reactions of the other children.

However, the priest acknowledged their gift and told the congregation how special it was for the following reasons:
The orange is round like the world.
The candle stands tall and straight and gives light in the dark like the love of God.
The red ribbon goes all around the 'world' and is a symbol of the blood Jesus shed when he died for us.
The four sticks point in all directions and symbolize North, South, East and West - they also represent the four seasons.
The fruit and nuts (or sometimes sweets!) represent the fruits of the earth, nurtured by the sunshine and the rain.

Some children in the UK make their own Christingles and gather together to light them in a Church Services that raise money for children's charities.
Posted by Unknown at 11:39:00 AM