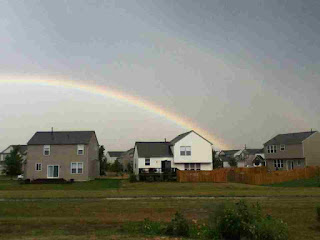 A relative posted this picture of a double rainbow on Facebook recently. What ignited my attention was the shape of the homes in her part of the country. She lives in Wisconsin and homes there, like all across the northern states, are square, upright and compact.

So different from southern states where older-built homes tend to sprawl and hug the ground. I’m certain architects could give me a practical explanation for this difference. When one begins to meditate on the different conformations a home can take, it boggles the mind.

In the writing of my novel, Twist of Fate, I found it necessary to research what resources were available to those hardy newcomers who first settled the western plains. They emigrated from the eastern part of our country where an abundance of building materials such as rocks and trees were readily available.

But on the grassy open plains, they found themselves at a loss as to what could be used to build a shelter. If fortunate enough to locate a rise in land sufficient, their first habitat usually was a dugout—they dug into the side of the hill and created a man-made cave. Most began their adventure in a sod house; it was the only material available in abundance to create a dwelling. Cutting blocks of sod and stacking them to build walls, it still took a few tree trunks to act as support for the sod blocks that became the roof.

How far we have come from those early days. Now, newer communities continue to sprout their  towering, space-eating buildings that nudge one another and have barely space to pass between. From one extreme to another, it seems to me.
Posted by Unknown at 7:51:00 AM