The sunflower is the state flower of Kansas. And driving through Kansas in summertime, you can see how this flower has become a mainstay of this area’s farmers.

First domesticated  in Mesoamerica (present day Mexico) by at least 2600 BC, sunflowers are an annual plant native to the Americas. They’re named after its huge, fiery blooms, whose shape and image is often used to depict the sun.

Many indigenous American peoples used the sunflower as the symbol of their solar diety, including the Aztecs and the Otomi of Mexico and the Incas in South America. Several Native American groups planted sunflowers on the north edges of their gardens as a "fourth sister" to the better known three sisters combination of corn, beans and squash.

Sunflower seeds were brought to Europe in the 16th century, where, along with sunflower oil, they became a widespread cooking ingredient. Leaves of the sunflower can be used as cattle feed, while the stems contain a fibre which may be used in paper production.In the mid-western US, wild (perennial) species often found in corn and soybean fields are considered a weed. 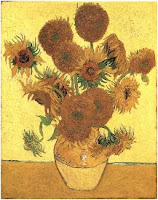 Sunflowers fascinated Van Gogh who painted a series of this flower. The photo accompanying this article epitomizes his most familiar painting of the series.

My favorite story about sunflowers is contained in this quote from My Antonia by Willa Cather.

“Fuchs told me that the sunflowers were introduced into that country by the Mormons; that at the time of the persecution, when they left Missouri and struck out into the wilderness to find a place where they could worship God in their own way, the members of the first exploring party, crossing the plains to Utah, scattered sunflower seed as they went. The next summer, when the long trains of wagons came through with all the women and children, they had the sunflower trail to follow.

I believe that botanists do not confirm Fuchs’s story, but insist that the sunflower was native to those plains. Nevertheless, that legend has stuck in my mind, and sunflower-bordered roads always seem to me the roads to freedom.”

Only a legend, but the sunflower has established its place in mid-American history.
Posted by Unknown at 9:57:00 AM