Monument to Past Glory 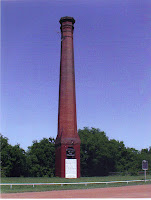 Drive west on Interstate 20 about seventy miles from Ft. Worth's city limits and you might be distracted by the sudden appearance of a brick smokestack jutting 126 feet above a few crumbling foundations. This is all that remains of a once-thriving community called Thurber.

Thurber, Texas once claimed to be the largest town between Fort Worth and El Paso. It began in 1886 with a coal mine started by the Johnson brothers, Harvey and William. Workers were recruited from eighteen nations, including Italy, Poland, Britain and Ireland. The whole town’s existence was devoted to the mining of coal and, to a lesser degree, the manufacture of brick.  Manufacture of brick began in 1897 and eventually the plant was making 80,000 bricks daily.

The Texas & Pacific Coal Company owned the resulting town; it is believed to be the first city with totally unionized industries. The Opera House was the center of the city's cultural life. Audiences of up to 655 would enjoy traveling plays and operas. The 9.1 acre cemetery has three distinct sections; the African-American, the Catholic, and the White Protestant.

During the first quarter of the twentieth century, railroads changed from coal to oil as fuel, diminishing the markets for coal. When the company moved its corporate location to Fort Worth in the thirties, that spelled the demise of Thurber and it became little more than a ghost town. When Thurber was torn down in the early 1930s, Miners’ Houses sold for $50, New York Hill Houses $250.

Atop New York Hill, a large brass plaque shows location of structures from when Thurber thrived.  The restored 100-year-old St. Barbara's Church, Thurber Cemetery, a furnished miner's house, and an authentic Italian bocci ball court give a glimpse into the town's past. In 1995, eight State Historical Plaques were dedicated to mark significant sites in Thurber.

Beside that smokestack visible from the highway, only a handful of buildings mark the site where once 10,000 residents claimed Thurber 'home'. Historical markers and deeply-planted memories are all that remains of the once-bustling town of Thurber but every Fourth of July since 1907, a large number of former residents return for a reunion. Thurber was their home town.
Posted by Unknown at 1:30:00 PM