My Son The Santa 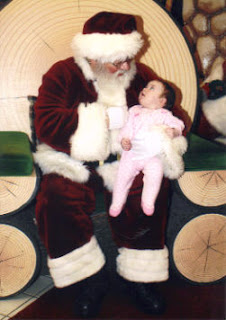 Today being my older son David's birthday my mind is flooded with memories. I decided to share one of the last pictures I received and the story behind it.

This is a picture of David dressed in a Santa suit holding his six-month-old granddaughter, Alexi. When David got the news that he was about to become a grandfather, one of the things he decided was that he would allow his beard to grow. When asked why the hair-growing binge, his reply was, "I want my grand-daughter to meet a 'real' Santa the first time she does so." From the look on her face, I suspect she is really puzzled by the familiar voice emitting from such strange surroundings. Don't you agree?

Which reminds me -- how many times have I been caught unaware when meeting up with a well-acquainted person in unfamiliar surroundings? When this supposedly strange person greets me with such familiarity, you can imagine my confusion, can see those brain cells scrambling to make some kind of connection. It's a bit embarrassing when the 'stranger' reminds you of the connection between the two of you. I'm thinking this is just one of the fun things that are going to happen over and over when we move on to our eternal home.

Shortly after he died, God gave me a picture of David playing his beloved piano, my mother by his side singing and beside her, my grandfather sawing away on his fiddle. To the side is my grandmother, beaming and clapping her pleasure. Sure am looking forward to all the good times.