Now, for all you extreme animal lovers,you probably won't want to read this posting.

Meet Midnight, the cat that recently adopted us. I didn't name her - a relative visiting from out of town, who shall remain nameless, gave that name to the cat.

It was early last Monday morning. I was headed for the toolshed to find a replacement coupling to fix a broken hose.  A car-load of family members had driven in (two hours, one way) to give my husband and I a hand with yard chores we hadn't been able to keep up with. Chore of the day were the huge piles of deadwood gathered beyond the pines to be burned. When I released water to the connected hose extended to the burn area, it broke.

I spotted a solid black cat nearby as I approached the toolshed. Thinking it was our current resident, I called out a hello to Sammi. But when it rose and stretched, I saw my mistake. Sammi came to us as a rescue kitten with a stub tail. I never knew the circumstances of that deformity. This cat was smaller and had a long luxurious tail. It followed me back to the group where the cat-lovers there made a big fuss over it. In fact, it followed me everywhere that day, dogging my footsteps and causing me to stumble a couple times.

Now, I knew adding a second cat to our household was a no-no. I tried to ignore it even though it showed much affection toward whomever allowed it in their lap. All day long, that cat remained the center of attention. 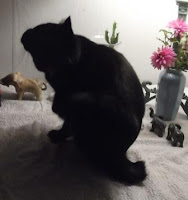 Meanwhile, Sammi, who usually asked to go out and would be through the open door in a flash, got the surprise of her life. When confronted by this strange cat just outside the door, its hissing intimidated our cat who tucked tail and retreated. We resorted to Sammi exiting by the front door until this cat figured that out and managed to play keep-away there also. Would you believe it became necessary to distract the stranger at the back door while my husband let Sammi either in or out at the  front door?

Anyone who lives in the country knows dropped-off animals are a regular occurence - all of our pets over the years have been rescued strays. Don't feed it and it will go somewhere else...right? By Thursday I couldn't stand it any longer...I opened a can of cat food.

For the past three days of steady drizzle,that cat has remained just outside the back door. It perches on top of the wooden box covering the faucet, protected by the roof's over-hang. A whole week later, Midnight is still making its presence known every time anyone approaches the back door. Today an empty box has been set up in the corner for additional shelter.

Please,someone, take this cat home with you.
Posted by Unknown at 9:57:00 AM