Return of the Carriage Age 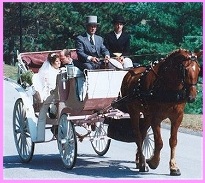 Daily headlines scream of the rising fuel costs for our automobiles. Our carriages of convenience have become albatrosses of conveyance. Technically speaking, the automobile is a coach, not a carriage.
Designed for private passenger use and for comfort or elegance, a carriage is an open, wheeled vehicle for people. The word carriage is from Old Northern French cariage, to carry in a vehicle. Here’s a tidbit of trivia to store away for some future Jeopardy program: Upper-class people of wealth and social position, those wealthy enough to keep carriages, were referred to as carriage folk or carriage trade.
The earliest recorded sort of carriage was the chariot during the 9th century. The medieval carriage was typically a four-wheeled wagon type, with a rounded top ('tilt') similar in appearance to the Conestoga Wagon.
Early colonial horse tracks quickly grew into roads and Colonists began using carts as these roads and trading increased between the north and south. Consistent use of these roads led to surfaces that enabled carriages to transport goods as well as people.
A bewildering variety of horse-drawn carriages existed. The names of many of these have now passed into obscurity but some have been adopted to describe automotive car styles - coupe, victoria, brougham, landau, and landaulet, cabriolet (giving us our cab), phaeton, and limousine – all these once denoted particular types of carriages.
Carriages and coaches began to disappear as use of steam propulsion began to generate more and more interest. Steam power quickly won the battle against animal power. The word, carriage, was so familiar that early models of the automobile were called horseless carriages.

The horse-drawn carriage has become a popular vehicle of entertainment and are available to rent in most larger cities. Find one near you and take time to breathe deeply as you experience the slower pace instead of rushing through life in your horseless carriage.
Posted by Unknown at 5:42:00 AM

Email ThisBlogThis!Share to TwitterShare to FacebookShare to Pinterest
Labels: Return of the Carriage Age