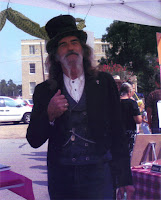 Ghosts From The Past

He strode through the crowd with the cockiness of Billy the Kid, gathering curious stares in his wake. With his battered beaver top hat, black frock coat grayed with age, and knee-skimming leather boots, Jim Davis looked like a re-incarnated apparition from an earlier time. All that was missing was a set of holstered pistols hanging on his slim hips.

I struck up a conversation and learned Jim had recently moved back home to the family farm in East Texas after spending his adult years in Arizona. Hearing I was the from same town, he broke into a grin.

When I asked about his get-up, his blue-gray eyes sparked with his zest for being alive. "I got this group I formed out in Arizona. We do shows...re-enacting gunfighter shoot-outs. Some of the fellows are coming out next February for a show I got scheduled."

He certainly looked the image, his shoulder-length brown hair that fell from beneath the hat's broad brim contrasted with the white handle-bar mustache trailing to his chest. In the course of our conversation, he mentioned his pleasure in reconnecting recently with a  boyhood chum.

"I would have walked right past him like a stranger if my wife hadn't spoken to this woman. While they were conversing, the man who was with her took a couple steps closer and said, "Jim Davis?"

I stared at him, wondering how he knew my name, he said. "When he said his name was Tim Newton, my response was, 'No way! Tim got killed in Vietnam. At least, that's what I always believed.' We hugged each other's neck, bawled like kids, to find out we'd both been wrong."

"You see," Jim went on, "we grew up together, played ball together and joined up at the same time. When we got sent to Vietnam, we got separated, went to different units. Both of us assumed the other got killed over there." He shook his head, a bemused expression on his face. "Just think, if my wife hadn't spoken to his wife...I didn't recognize him...," another shake of his head.

Jim went on to talk about his experiences in handling powder-loaded guns and participating in re-enactments. over the years.

When he finally walked away, I was left with the sound of his jangling spurs as they dragged on the concrete. I gazed at his retreating back and had to admire a guy who straddled two worlds and felt comfortable in both.
Posted by Unknown at 6:03:00 AM