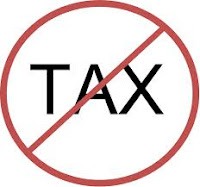 It presently has a wider use of meaning not being punished for something that you have done.
Posted by Unknown at 5:43:00 AM