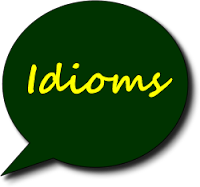 Ever used the phrases "Under the weather" "Shoot the breeze"  "Off one's rocker"? Then you spoke an idiom.

Idioms are words, phrases, or expressions that are either grammatically unusual, as in, “Long
time, no see!”, or their meaning cannot be taken literally, as in, “It's raining cats and dogs!”
This expression does not mean that cats and dogs are falling from the sky, but it is a metaphorical
expression (word picture) that means that it is raining very heavily. In other words, idioms don't mean exactly what the words say. They have, however, hidden meaning. When used in everyday language, they have a meaning other than the basic one you would find in the dictionary. Every language has its own idioms.

There are estimated to be at least 25,000 idiomatic expressions in the English language. Some idioms, in contrast, are transparent. For example, 'lay one's cards on the table' means to reveal previously unknown intentions, or to reveal a secret.“She is pulling my leg” has at least two meanings: a literal meaning and a figurative meaning.  Pulling someone's leg means either that you literally grab their leg and yank it, or figuratively someone is trying to convince you of a tall tale.

Proverbs such as these usually have figurative meaning. When one says "The devil is in the details", one is not expressing a belief in demons, but rather one means that things may look good on the surface, but upon scrutiny, problems are revealed.

Take the idiom “to kick the bucket.” An English speaker would understand the phrase "kick the bucket" to mean "to die" – as well as to actually kick a bucket. But the same phrase in other languages sometimes doesn’t portray the same connotation. Idioms from other languages that are analogous to "kick the bucket" in English are Danish: at stille træskoene 'to take off the clogs', Italian: tirare le cuoia 'to pull the skins' or French: manger des pissenlits par la racine 'to eat dandelions by the root'. Somehow they don’t convey quite the same message.

You might be interested in consulting special idiom dictionaries. Here are some helpful online idiom
dictionaries: http://dictionary.cambridge.org/  and http://idioms.thefreedictionary.com/.
Posted by Unknown at 8:31:00 AM