Writing Prompt: I Found an Egg 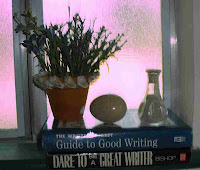 How do you feel about writing prompts? I find them quite challenging and in recent months, I've been responding to a prompt included in my writer's group's monthly newsletter. The photo above shows two of the most recent prompts distributed to write about: a small bottle of sand and a polished egg-shaped rock. Here's what the later inspired me to write.

Minuscule and pale blue, I identified it as a bluebird egg and almost stepped on it as I walked from house to office. It lay in the dirt, a far distance from any of the bluebird nesting boxes my husband constructed and mounted about our acreage.

How in the world did it get here? “Perhaps stolen from its nest by a ‘robber’ bird,” my husband suggested. Or could the parent birds themselves somehow have known it was defective? Did they carry it away and discard it in flight? Such a mystery surrounding this fragile object.
I picked it up and laid it beside another in a old nest my husband rescued earlier. But the puzzle of how it ended up in the middle of my daily path continued to nag at me. Its image remained in my mind, prompting questions throughout my working period.

I kept thinking about the possibility that the bird parents instinctively knew this egg would not produce a baby bird. That they deliberately expunged it from their nest. And what, I asked myself, does that say to the human condition?

An egg symbolizes expectations, hopes for the future, a dream realized. Could this mean there might be times to discard a dream, intuitively knowing the reach is beyond fulfillment? Perhaps the possibility exists that achievement of this particular dream, one we’ve clung to and stubbornly tried to fulfill, will not bring the satisfaction desired. Like the bluebird parents disposed of a defective egg, perhaps we need to examine our dreams and goals.

What would it inspire you to write?