Ringing In a Song 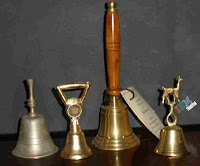 Over the years, the collector in me has accumulated a small assortment of handbells. Examples range from the klitsch, a made-for-tourist-trade model with the seal of Connecticut, the Nutmeg State, imbedded in the handle. On the other hand, one of my handbells sports a hand-crafted handle of Boi d’Arc wood; a gift from an uncle of my husband, who is an extremely gifted artisan with wood.

One day curiosity got the best of me and I did a little online researching on the history of handbells.


In medieval times, bells were steeped in superstition. They were baptized, and once baptized had the power to ward off evil spells and spirits. Bells were hung in doorways and visitors would ring the bell to drive the spirits away then pass inside - which is the likely origin of the present day doorbell!

During this period, Christians travelled throughout Europe ringing bells while spreading the news of the risen Christ, and summoning people to congregate. Eventually, large bronze bells were cast and towers were constructed to house them. At first these towers were built apart from the church; then belfries were added above the church structures.

The sound of consecrated bells was also believed to dispel thunder and lightning and to calm storms at sea for all of which demons were believed to be responsible. When a tempest broke out bells would be rung in an effort to clear the storm.  ( Info from www.bellringers.com)

The first set of tuned bronze hand bells were developed by brothers Robert and William Cor in Aldbourne, Wiltshire, England in 1660. Originally, tuned sets of hand bells, such as the ones made by the Cor brothers, were used by change ringers to rehearse outside their towers. Tower bell ringers' enthusiasm for practicing the complicated algorithms of change ringing could easily exceed the neighbors' patience, so in the days before modern sound control hand bells offered them a way to practice ringing without the aural assault. The hand bell sets used by change ringers had the same number of bells as in the towers — generally six or 12 tuned to a diatonic scale.

Handbells are relative rare outside of the confines of church services—although less so now than in the 1980s and early 1990s. A handbell choir or handbell ensemble (in the United States) or handbell team (in England) is a group that rings recognizable music with melodies and harmony.

There is even a national organization of handbell musicians with regional branches. Membership in the Guild is open to full ensembles as well as to individuals. Handbell Musicians of America held its National Seminar 2012 in Cincinnati, Ohio on July 18-21.

My small collection has a limited range of bell tones--not enough variety to attempt playing a tune. Guess it's back to the flea markets for more hand bells.