It's My Favorite Wake-Up Brew 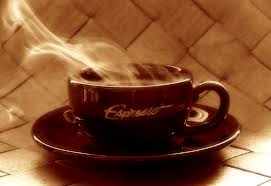 Its distinctive fragrance wafts through nasal passages to tickle brain cells into wakefulness. The aromatic liquid slides across the tongue and down the throat, giving my body a jolt of caffeine in its passage. Ah, coffee! How would I ever make it without my first-thing-in-the-morning cup of hot java.
Coffee has been the elixir of my life since my Canadian French parents introduced me to café au lait…or should I say lait au café...a glass of milk with a teaspoon of coffee flavoring.

In the early days of my working career, the bus I had to take always got me into town before my workday began. So I took to spending the time until the bank opened seated in a nearby café; my breakfast...a cup of coffee and a donut. I’d nurse that vitalizing drink to the refrains of Little Darlin’s La.-la-la-la-las or the Sha-na-na-nas of the Silhouettes’ Get a Job. I guess those tunes date me.

The history of coffee goes back at least as far as the thirteenth century. Several different legendary accounts of its origin exists. My favorite is of  a goat-herd, Kaldi, who noticed the energizing effects on his flock when they nibbled the bright red berries of a certain bush. He chewed on the fruit himself and his exhilaration prompted him to bring the berries to a Muslim holy man. The holy man disapproved of their use and threw them into the fire, from which an enticing aroma billowed. When the roasted beans were raked from the embers, ground up, and dissolved in hot water, they yielded the world's first cup of coffee.

Studies have shown its properties drive away fatigue and lethargy, and bring to the body a certain sprightliness and vigor. That confirms my experience and it’s enough of a recommendation for me.

By the 16th century, coffee use had reached the rest of the Middle East Persia, Turkey, and northern Africa. Coffee then spread to Balkans, Italy, and to the rest of Europe, to Indonesia, and later to the Americas.

The Grand Cafe in Oxford is alleged to be the first Coffee House in England, opened in 1650. By 1675, there were more than 3,000 coffeehouses throughout England. In Germany women frequented coffee houses but in England they were banned. Thank goodness that’s no longer a practice.

So be it know as brew, java, mud, or joe. May your preference be café au lait, café noir, cappuccino, decaf, espresso, or mocha. Let’s all send a big thank you to our Middle Eastern neighbors—especially that unknown goatherd—for providing the world with the greatest wake-up potion in the world.
Posted by Unknown at 2:41:00 PM