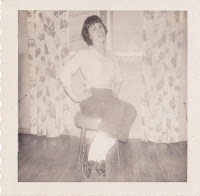 I'm sending birthday greetings to my sister Angie who is celebrating that special day tomorrow. With adulthood, our lives took separate paths and the miles between meant visits have been few and far between over the years. However, it is Alzheimer's Disease that stole the sister I once knew.

Over the past few years, the pernicious destruction of Alzheimer's has eaten away at our closeness until Angie no longer resembles the much-loved sister I once knew. She is being cared for in the special facility designated her home. She must be fed and bathed by loving attendants and no longer recognizes anyone, not even faithful daughters.

So...to the sister who drew an imaginary line down the middle of the double bed we shared and warned me not to invade her space.

To the young mother of four who helped build the home she shared with her family...who grew a humongous garden to feed them...who was famous in the neighborhood as the Tupperware Lady...and who released her exhuberance serving as captain of the softball team.

To the sister and woman who has been robbed of her memories, her vicacious personality destroyed, and has degenerated to the mere physical shell of a human being.

Across the miles and back through the years, I send happy birthday wishes to my sister Angie and look forward to our joyous reunion on the other side of the veil.
Posted by Unknown at 8:24:00 AM