Celebrate with a 'burning' 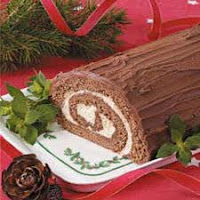 Burning a Yule log is probably the oldest Christmas tradition there is and a part of traditional Yule or Christmas celebrations in several European cultures. It started even before the first Christmas.

In the fourth century AD when Pope Julius I decided to celebrate Christmas around the Winter Solstice, the Solstice Yule log tradition continued but the fire came to represent the light of the Savior instead of the light of the Sun.

The Yule log was originally an entire tree, carefully chosen and brought into the house with great ceremony. The largest end of the log would be placed into the fire hearth while the rest of the tree stuck out into the room. The fire used to burn the log was always started with a remnant from the log that had been burned the previous years festivities.Personal faults, mistakes and bad choices were burned in the flame so everyone's new year would start with a clean slate.

The first mention of the Yule log in Britain is a written account by the clergyman Robert Herrick, from the 1620s or 1630s. It was brought into the farmhouse by a group of males, who were then rewarded with free beer from the farmer's wife. The log's role was primarily one of bringing prosperity and protection from evil

In traditional Serbian Christmas celebrations, the log is solemnly brought into the house and placed on the fire on the evening of Christmas Eve. It is believed that its warmth and light symbolize the coming of Christ.The burning of the log is accompanied by prayers that the coming year may bring much happiness, love, luck, riches, and food. The log has to burn all night. Remains of the log are cherished, and in some traditions, the keeping of the remnant all the next year signified God’s  protection would remain across the year.

In Germany, the log is referred to as Christklotz, Christbrand or Weihnachtsscheit ("Christ-log" or "Christmas-log"). Kindled on Christmas Eve, the log in German tradition functioned as a lightning charm.

In Appalachia, as long as the log, or "backstick" burned, you could celebrate. Often a very large "backstick" was chosen and soaked in a stream to ensure a nice long celebration. In the early nineteenth century, American slaves didn't have to work as long as the Yule log burned. Almost everywhere, the fire was started with that bit of the last year's log, to symbolize continuity and the eternal light of heaven.

The expression 'Yule log' has also come to refer to log-shaped Christmas cakes, also known as chocolate logs or Bûche de Noël. It was an innovative French pastry chef (in the late 1800s) who came up with the idea of replacing the real 'yule' log with a cake that was log-shaped.

The dessert is usually in the form of a large rectangular pound or yellow cake spread with frosting and rolled up into a cylinder - one end is then lopped off and stood on end to indicate the rings of the "log."