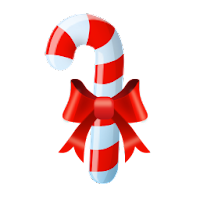 The Christmas Candy Cane originated in Germany about 250 years ago. They started as straight white sugar sticks.

A story says that in 1670, in Cologne, Germany, the choirmaster at Cologne Cathedral was worried about the children sitting quietly all through the long Christmas nativity service. So he gave them something to eat to keep them quiet! He asked a local candy maker for some sweet sticks for them. In order to justify the practice of giving candy to children during worship services, he asked the candy maker to add a crook to the top of each stick, which would help children remember the shepherds who paid visit to infant Jesus..

From Germany, the candy canes spread to other parts of Europe, where they were handed out during plays reenacting the Nativity.Sometime around 1900 the red stripes were added and they were flavored with peppermint or wintergreen.The candy cane has been mentioned in association with Christmas since 1874, and as early as 1882 was hung on Christmas trees

Sometimes other Christian meanings are giving to the parts of the canes. The 'J' can also mean Jesus. The white of the cane can represent the purity of Jesus Christ and the red stripes are for the blood he shed when he died on the cross. The peppermint flavor can represent the hyssop plant that was used for purifying in the Bible.

Around 1920, Bob McCormack, from Georgia, USA, started making canes for his friends and family. They became more and more popular and he started his own business called Bobs Candies. (and yes, the apostrophe is left off intentionally) This is where many of our candy canes come from today.  What you might not know is that Bobs is also on record as having produced the largest single candy cane in history with an impressive sucker measuring 8 feet long and weighing over 100 pounds.  In 2005, Bob's Candies was bought by Farley and Sathers but they still make candy canes!
Posted by Unknown at 9:17:00 AM