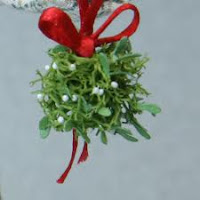 A sprig of mistletoe hung over a doorway during Christmas remains one of the season's most beloved traditions and it has an ancient history. Known as a parasitic plant, mistletoe grows attached to trees, especially oak. Its Greek name means "thief," referring to its rootless existence. As a parasitic plant, mistletoe grows on the branches or trunk of a tree and actually sends out roots that penetrate into the tree and take up nutrients. But mistletoe is also capable for growing on its own.

The mistletoe commonly used as a Christmas decoration (Phoradendron flavescens) is native to North America. There is also a European mistletoe (Viscum album)  which is a green shrub with small, yellow flowers and white, sticky berries considered poisonous.

Commonly seen on apple, the rarer oak mistletoe was venerated by the ancient Celts and Germans and used as a ceremonial plant by early Europeans. The Greeks and earlier peoples thought that it had mystical powers and down through the centuries it became associated with many folklore customs. It was considered to bestow life and fertility; a protection against poison; and an aphrodisiac.

The mistletoe of the sacred oak was especially sacred to the ancient Celtic Druids. The custom of using mistletoe to decorate houses at Christmas is a survival of the Druid and other pre-Christian traditions. In the Middle Ages and later, branches of mistletoe were hung from ceilings to ward off evil spirits. In Europe they were placed over house and stable doors to prevent the entrance of witches.
Kissing under the mistletoe is first found associated with the Greek festival of Saturnalia and later with primitive marriage rites.  One belief was that it has power to bestow fertility.

In Scandinavia, mistletoe was considered a plant of peace, under which enemies could declare a truce or warring spouses kiss and make-up. Later, the eighteenth-century English credited mistletoe with a certain magical appeal and created a kissing ball.

Tradition decreed that when a young lady stood under a ball of mistletoe at Christmas time, brightly trimmed with evergreens, ribbons, and ornaments, she could not refuse to be kissed. Such a kiss could mean deep romance or lasting friendship and goodwill. Thus if a couple in love exchanges a kiss under the mistletoe, it is interpreted as a promise to marry, as well as a prediction of happiness and long life.

If the girl remained unkissed, she cannot expect to marry the following year.
Posted by Unknown at 2:15:00 PM