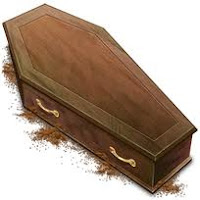 Someone sent me this recently and gave me motivated to do a little research.

England is old and small.They started running out of places to bury people. So, they would dig up coffins and reuse the grave. In reopening these coffins, one out of about 25 were found to have scratch marks on the inside and they realized they had been burying people alive.
So,they thought they would tie a string to the person's wrist and lead it through the coffin,up through the ground and tied to a bell.Someone would have to sit there all night and listen for the bell.Hence, if the bell rang, the person on the,"graveyard shift" would know that someone was saved,"saved by the bell" or that he was a "dead ringer"

Although such devices did exist and were occasionally used, those phrases may have had nothing to do with bells being attached to coffins to guard against premature burial.

The Graveyard Shift, or Graveyard Watch, was the name coined for the work shift of the early morning, typically midnight until 8am. The name originated in the USA at the latter end of the 1800s. There's no evidence at all that it had anything directly to do with watching over graveyards. The 'graveyard watch' version of the phrase was normally used by sailors on watch - hardly a group in a position to supervise buried coffins.

Gershom Bradford, in A Glossary of Sea Terms, 1927: "Graveyard watch, the middle watch or 12 to 4 a.m., because of the number of disasters that occur at this time."

“Saved by the bell” is boxing slang that came into being in the latter half of the 19th century. A boxer who is in danger of losing a bout can be 'saved' from defeat by the bell that marks the end of a round.

“dead ringer” - A ringer is a horse substituted for another of similar appearance in order to defraud the bookies. This word originated in the US horse-racing fraternity at the end of the 19th century. The word is defined for us in a copy of the Manitoba Free Press from October 1882: "A horse that is taken through the country and trotted under a false name and pedigree is called a 'ringer.'" It has since been adopted into the language to mean any very close duplicate. As a verb, 'ring' has long been used to mean 'exchange/substitute' in a variety of situations, most of them illegal.

My thanks once again to http://www.phrases.org.uk/index.html for giving the inside goods on these intriguing turns of speech.