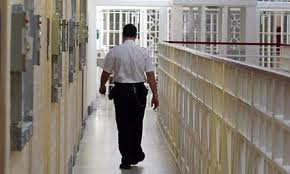 Author Tony Levy wrote a fascinating account of his 25-year career as a prison officer in the British prison system. (A Turnkey Or Not  http://amzn.to/OWHpjZ)

As I read, I came across the term "screws" used to describe himself and others in the same occupation, and became curious as to its origin. I emailed my question to him and he kindly responded with the following:


“The term screw for a prison guard is based on the fact that screw was originally slang for "key." One of the most important functions of a prison guard, or turnkey, as he's often called, is to see that prisoners are locked up at the appropriate times -- and that involves turning the "screw."

Interestingly enough, Henry Mencken reports in The American Language that in the 1920s deskmen and bellboys in hotels used screw as a slang term for room key. Another theory is that screw refers to the thumbscrews used by jailers in ancient times to torture prisoners into confessing.

There is also a theory that before there was work for prisoners there was some sort of treadmill device inside their cells that they had to turn so many revolutions before they earned their food. If a prisoners was very fit and could walk the treadmill easily, there was a screw on the outside wall that the guard could come along and tighten down and so increase the resistance, making it harder for the prisoner to earn his food.

Hence the expression 'Here comes the Screw' not sure what is really the correct answer but hope this hasn't bored you. All the best Tony”

Isn't the history of words interesting? He also told me the term "bobby" referred only to a police officer which brought to mind other slang terms associated with the police field such as "coppers" and "brass". So, it's off on a search to hunt down their origins as well.

This led me to a fascinating website: http://en.wikipedia.org/wiki/List_of_police-related_slang_terms
Here I was introduced to the origins of such terms as:
Buttons - used in a black neighborhood, referring to more-traditional police uniforms with brass buttons.
Coppers - Another name for police officers. The name "copper" comes from the copper badges that police used to wear back in the day.

Bobby - derived from the British Home Secretary, Sir Robert Peel (Bobby being a nickname for Robert) the founder of the Metropolitan Police. It occurs in fixed phrases e.g. "bobby on the beat", "village bobby". Commonly used as a name of an officer in a helmet walking the streets. Special Constables are sometimes referred to as "Hobby Bobbies".

See what mind-expanding things you learn by reading my blog postings?