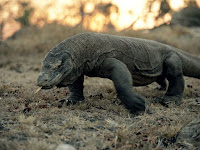 This is the Chinese year of the dragon and China is expecting a 5% increase in the number of babies born in 2012.

The dragon, considered the most auspicious zodiac sign in Chinese culture, is often associated with good fortune and intelligence and is believed to be the sign of those destined for success.
Some famed dragon babies include martial arts star Bruce Lee, Spanish artist Salvador Dalí and President Bill Clinton.

People who are born in the Year of the Dragon share certain characteristics. These may include: innovative, enterprising, flexible, self-assured, brave, passionate, conceited, tactless, scrutinizing, unanticipated, and quick-tempered.

These to-be-desired characteristics do not, however, exhibit themselves in the real-live dragons that inhabit the world we live in.

Thriving in the harsh climate of Indonesia's Lesser Sunda Islands for millions of years, Komodo dragons are considered the dominant predators on the handful of islands they inhabit.

Komodo dragons are the heaviest lizards on Earth, reaching 10 feet in length and more than 300 pounds. They have long, flat heads with rounded snouts, scaly skin, bowed legs, and huge, muscular tails.

They will eat almost anything, even humans. Animals that escape the jaws of a Komodo can anticipate a short life span. Dragon saliva teems with over 50 strains of bacteria, and within 24 hours, the stricken creature usually dies of blood poisoning.

On second thought, perhaps Komodo dragons can be considered enterprising, self-assured, passionate, and unanticipated. Seems like these characteristics are desired in both the human and reptile world.
Posted by Unknown at 5:50:00 PM