A Woman's Place Is In the Home 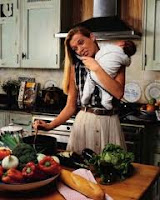 This notion has been expressed in a variety of forms by numerous people over the ages, all of them men of course. The proper proverbial place for a woman is usually expressed as 'the home' but is and has been also said to be 'the family' and 'the kitchen'.

The ancient Greeks got in there first. The playright Aeschylus, in Seven Against Thebes, 467 B.C., wrote:

"Let women stay at home and hold their peace."

"A Woman is to be from her House three times: when she is Christened, Married and Buried."

In 1832, The New Sporting Magazine, Volume 3, included the earliest example of 'a woman's place is in the home' that I can find in print:

"A woman's place is her own home, and not her husband's countinghouse."

Times change and with them our proverbs. In November 1970, Time magazine printed a piece titled Newcomers in the House. Bella Abzug campaigned for office in the US Congress using the slogan "This woman’s place is in the House... the House of Representatives."
Posted by Unknown at 7:05:00 AM